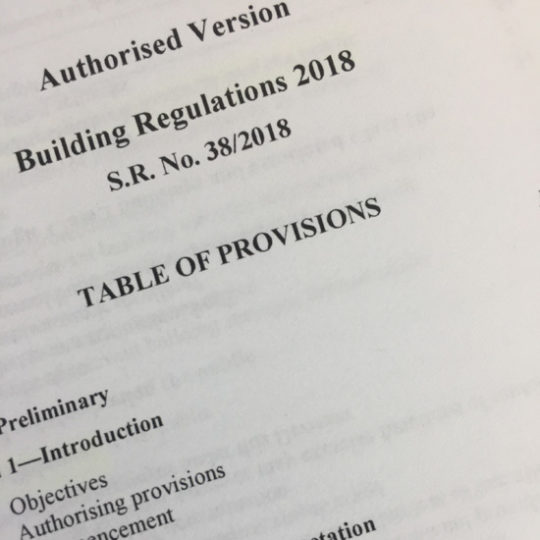 The new Building Regulations 2018 were enforced in Victoria on 2nd June 2018 which replaced the Building (Interim) Regulations 2017. It presents some major changes and should be read thoroughly by all building practitioners in Victoria.

All forms in the previous Regulation have been changed and some new forms have been added.

All of the previous regulation clauses have been renumbered too so Building Surveyors will need to update their form templates accordingly to comply with the new form requirements and applicable Regulation references.

Some of the fundamental newly referenced clauses include –

Regulation 229 (previously 1011) – Existing buildings – Change of Use (or classification)

Regulation 236 (previously 116) – Application of requirements in the BCA Volume One relating to access to buildings for persons with disabilities.

The intent of most regulations has not changed from the previous regulations.

VBA have produced Regulation Number Finders (RNF) and a summary of all changes on their website which is very useful.

For Building Surveyors – Don’t forget to update your forms and produce the required new forms found in Schedule 4.